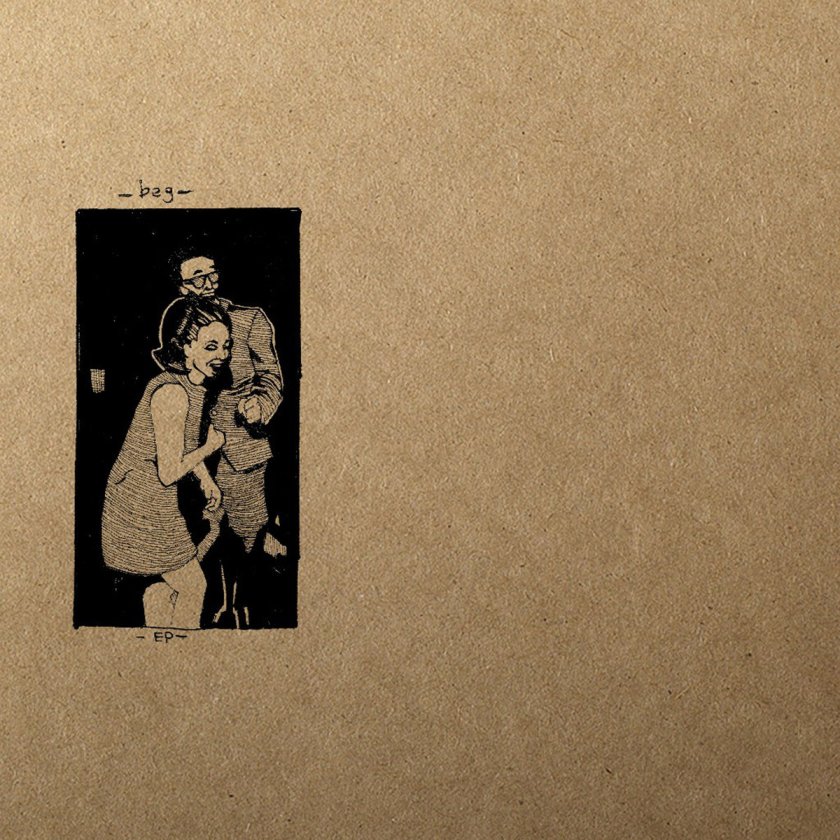 Superhuman chaos grind from a member of Art of Burning Water (‘PhD-beat‘ 10/10) and a member of The Afternoon Gentlemen – so restless and heavily encrypted it could be both bands playing at once. Beg churn out the most challenging spread of riff/blasts you’re likely to encounter this year, segmenting their tracks into hundreds of brutal hurdles that hurt the brain as much as the ears, and underneath the bursts of flak, a constant nauseous whirl of soft noise exarcebates the pervading sense of unease. Krupskaya and Narcosis both hit this level of rare intensity in years passed, but neither did it in this warped manner, bringing in serrated bits of repurposed AmRep sludge and maniac powerviolence and often executed as surgically as extreme metal. A truly brilliant seven minutes of mastergrind 7″. 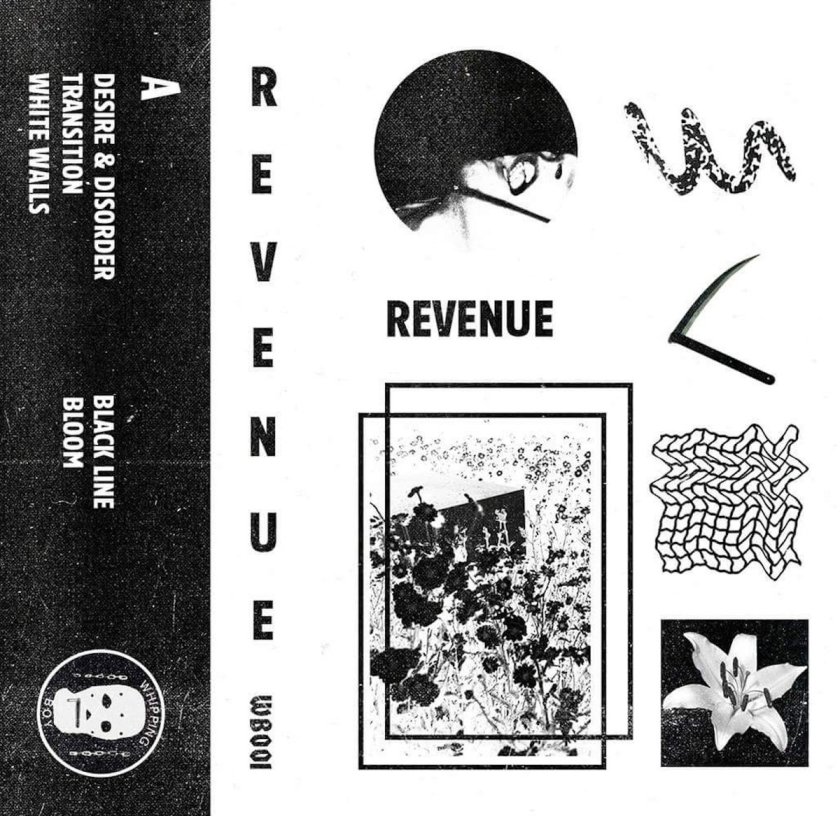 A glorious 5 goals scored by London’s new suave punks, Revenue, featuring members of Jackals, that little known band Fat White Family, No Coast and a few other acts (Boneyards? Easy Hips? Static Palm?) that probably ring zero bells to resolutely punk ears. This first demo is an excellent guide to making achingly modern updates on classic guitar music without coming across like empty-headed fashion mopes (the kind that huddled around Power Lunches until its closure) – the runaway bass pogo jaunts, covert rock’n’roll melodies and matter-of-fact vocals demand attention regardless of whether you’re coming to the band as a fan of Observers/Red Dons, The Adverts or The Walkmen. The unfussy production works so well applied to the lively nature of Revenue’s tracks, and consider it mandatory to pick up this tape from Whipping Boy Records if you’ve ever obsessed over bands like The Estranged or La URSS. 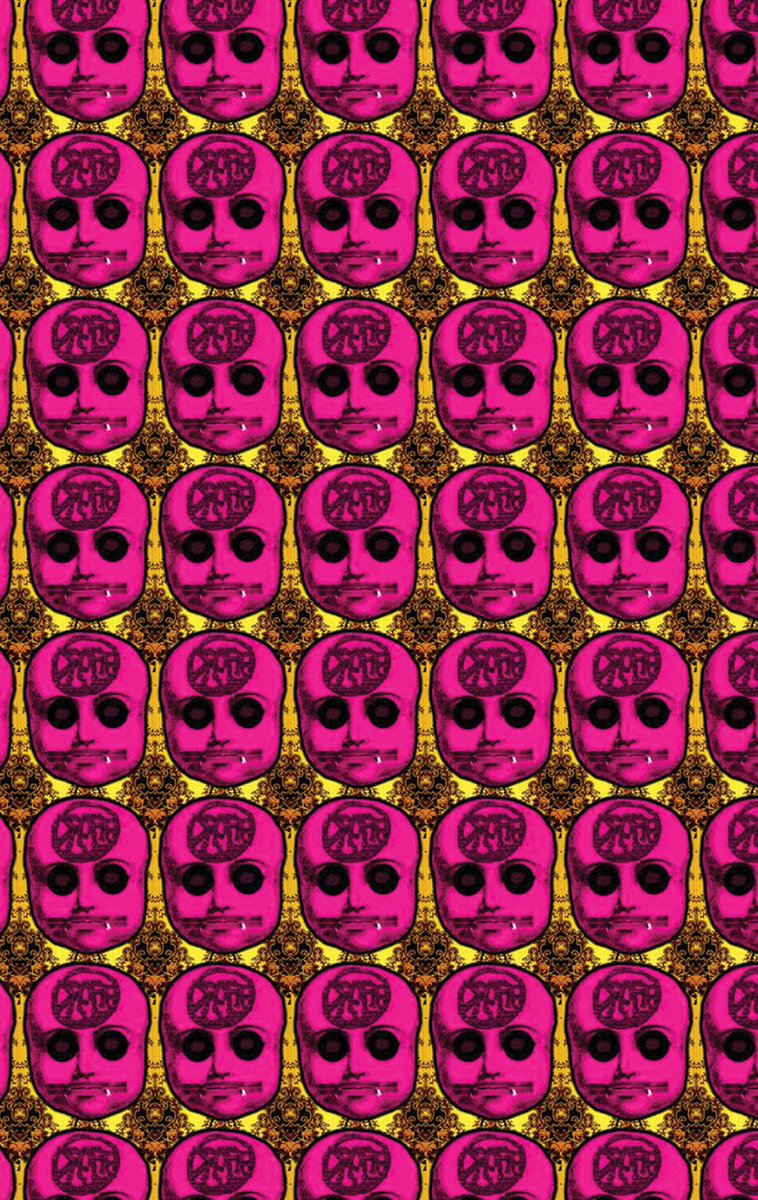 Extraordinarily crude sludge headaches from Oxford’s newest, Drore. Their first demo (which sold out way too fast…) is a filthy disharmonic sandpit of deliberate mishits and bellicose riffing that opens with the literal sound of pissing before proceeding into a savage musical portrayal of passing agonising kidney stones. The four songs are crammed with loose strung buzzsaw riffs, each one a composite of multiple quarreling notes that ooze unease, and the raw vocals are overflowing with despondency. There’s a musty metallic taste that brings to mind Lich, an angular darkness that relates well to Ghold’s PYR, and during the most terrifying passages, Drore sound like Deathspell Omega’s punk side project. It’s obscene, obscure and incompatibly brutal, and one of the most crucial demos to get to grips with this year. 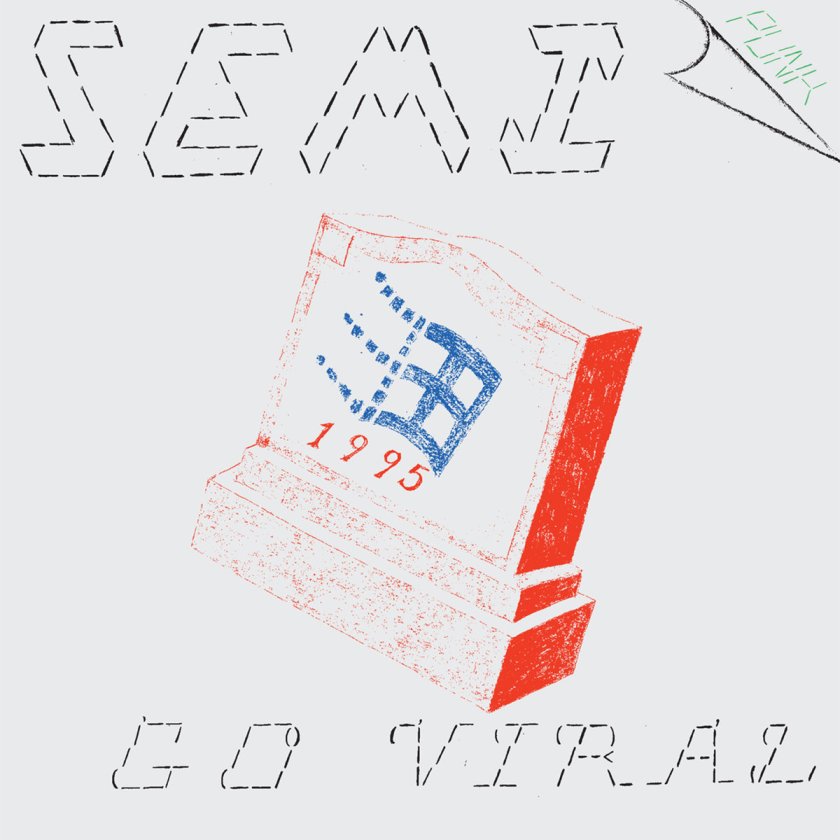 London’s Semi only crop up once in a while, dishing out doses of repellent noize hardcore punk to confused audiences then skulking away again, but now they’ve got something posted permanently online in the La Vida Es Un Mus 7″ Go Viral. The four tracks are pickled in a piercing bitcrushed treble that renders everything positively inaudible, covering up their crashing pogo with torrential distortion and scrambled FX, and with dial-up breakdowns and complaining vocals, Semi tread the fine line between punk sophisticate and lowlife scum punk extremely well. An essential update for fans of The Wankys, as well as followers of semi-related capital city bands like No, Snob, Good Throb. Beware of this audio malware. 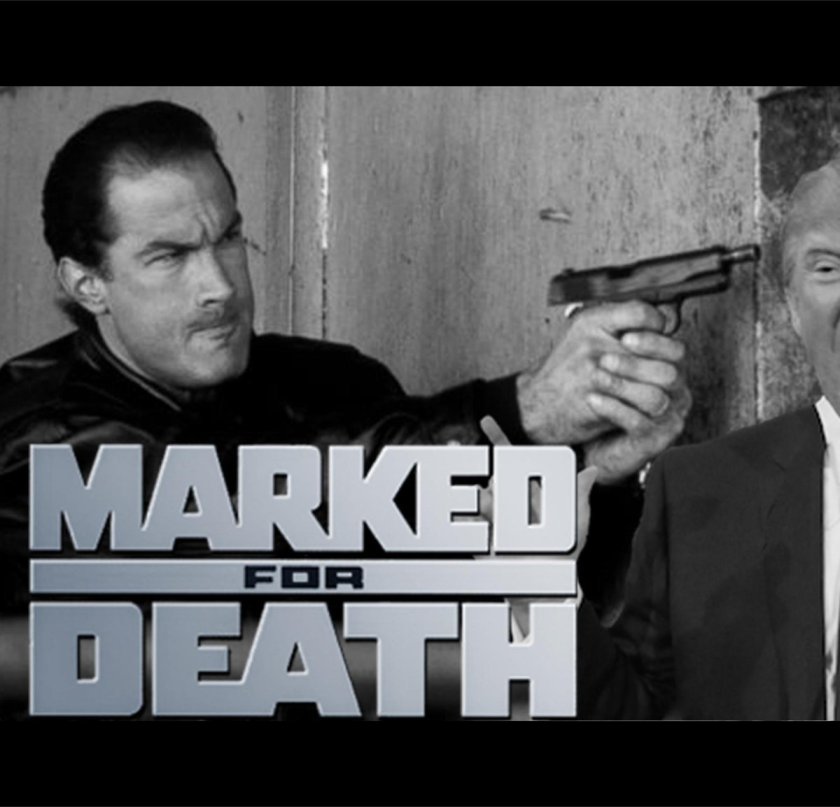 Marked For Death sound too good to be new – high concentrate blunt force hardcore played viciously fast and direct like this has become virtually extinct in the last few years, and this release does nothing to change the sparse outlook either… On closer inspection, the nine tracks are either a Best Of compilation or re-recordings of old songs (the originals released in the early 2000s), put up ahead of their imminent reunion show with Siege at Temple of Boom. A relic of a BBC article, a live set supporting Mental, their Discogs and this Collective Zine thread provide a bit of context for this gnarly Middlesbrough band, and their frantic style of brutal rotor blade riffs and lean songwriting echo through the excellent Volunteers, SSS at their punkest/fastest, Never Again’s ‘Pressure II‘, and the indomitable Voorhees, who get a decent cover here. Wipes the floor with some of the contrived attempts at hardcore that are so popular currently. 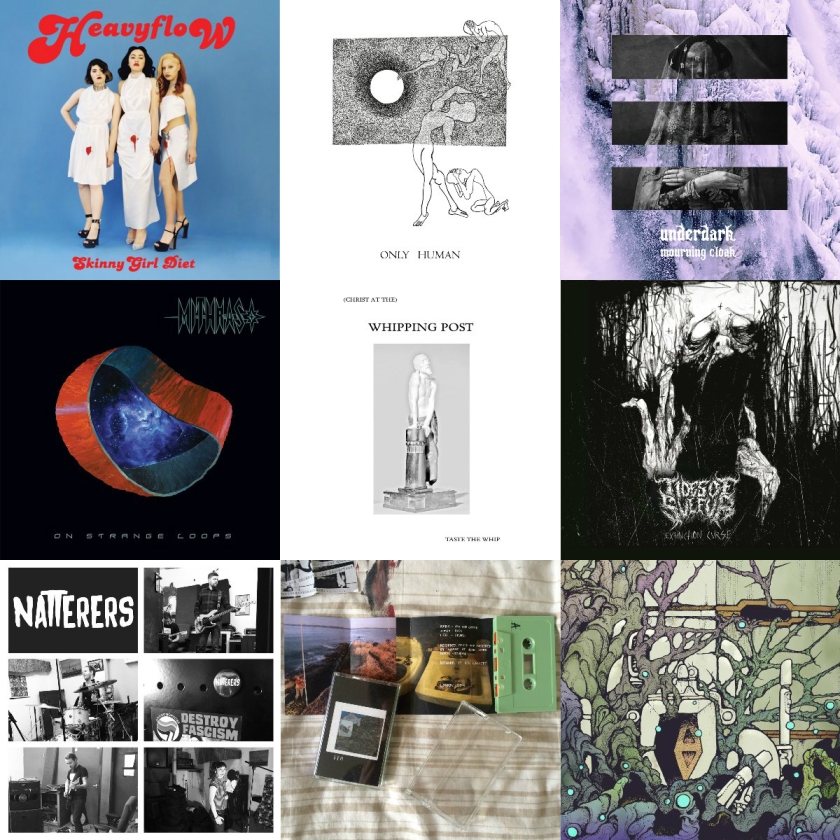 A slow month on the site, blame it on the glimpse of summer and live music. Here’s a massive haul of new tracks – there’s a lot of omissions and some here deserve longer write-ups, but keeping up with such a hefty batch of releases is no easy task.

In the last few years there’s been something of a doom boom in the UK, and while the quality hasn’t matched the quantity across the board, there’s still a lot of innovators pushing open some breathing space by putting out heavy tunes that make your head feel like it’s in a giant garlic crusher. Belfast’s Slomatics are definitely one of those aforementioned experts in sadistic tone warfare, and their fifth LP, Future Echo Returns, is a long They Live style brawl of volcanic riffs and repeated decreases in tempo. The grand finale ‘Into The Eternal’ is a must if you were disappointed by Pallbearer’s recent cover of Type O Negative. Also out on the same label (Black Bow) are Tides Of Sulfur, who have a cadaverous death metal take on sludge that goes for the graveyard groove of Coffins, the indecent depth of Warhorse and Cianide, and the journeying inventiveness of Slabdragger, punctuated with inconsiderately heavy doom beatdowns.

Skinny Girl Diet have their new LP Heavy Flow coming out soon, and the tracks so far are confrontational, noise-drenched grunge future classics – ‘Yeti’ beats at least 50% of Nirvana classics at their own game, but they’re definitely a punk band and crucial for fans of Action Swingers and fellow Londoners Comanechi (RIP).

There’s another month or so until the remainder of On Strange Loops touches down, but stupidly advanced extreme metallers Mithras have two tracks out ahead of its release, ‘Between Scylla and Charybdis‘ and ‘The Statue On The Island‘. As before, their infuriatingly vivid technicality and huge, awe-inspiring atmospherics make Morbid Angel look like amateurs, and between his expertise in astrophysics and total mastery of multiple instruments, you wonder if Leon Macey is of this earth at all…?

You definitely don’t have to be freakishly gifted to make savage noise though, after all, we’re Only Human. This new Reagent Records band from Yorkshire have already been compared to YDI a couple of times, a fair comparison given they deal in blurry, cyclical, nightmare hardcore punk on their demo, though there’s also slobbering The Accused style yelling and hints of the Stupids and Cheetah Chrome Motherfuckers. Also digging up an ancient USHC sound and from Leeds or thereabouts are Whipping Post, and their first demo Taste The Whip is some seriously addled crawling fuzz hardcore that pretty much picks up off where Mob Rules left off, making miserabler improvements on later Black Flag and bands like Nomos – the track ‘Pull The Cord’ especially is a heaving sleepwalk stomp.

Not done yet… Also from the locality and leaning towards a classic US sound are Natterers, whose debut demo is made up of upbeat rock’n’roll indebted instrumentation (the kind that Regulations and Adolescents both were so good at utilising in their songwriting) and dominated by loud unabashed vocals.

London’s Dym might rub up hardened heavy fans the wrong way, but the dreamy, queasy, mesmeric melodies that lull, lurch and snap throughout their dead sick of trying EP are a welcoming mix of Hum, Mahumodo and mid 90s Dischord emo, all very introspective and art school – not that there’s anything wrong with that, and if you’re after more contemplative matter in the screamo vein, Nottingham’s Underdark present a very intricate, refined version of black metal on their first, Mourning Cloak. The slick post-rock production bolsters their pretty compositions immeasurably as they ascend towards strained emotional climaxes, but for the most part they knuckle down with swaying, negative riffs and intermittent blasts, placing themselves along established BM expanders like Wolves In The Throne Room and (inevitably!) Deafhaven. 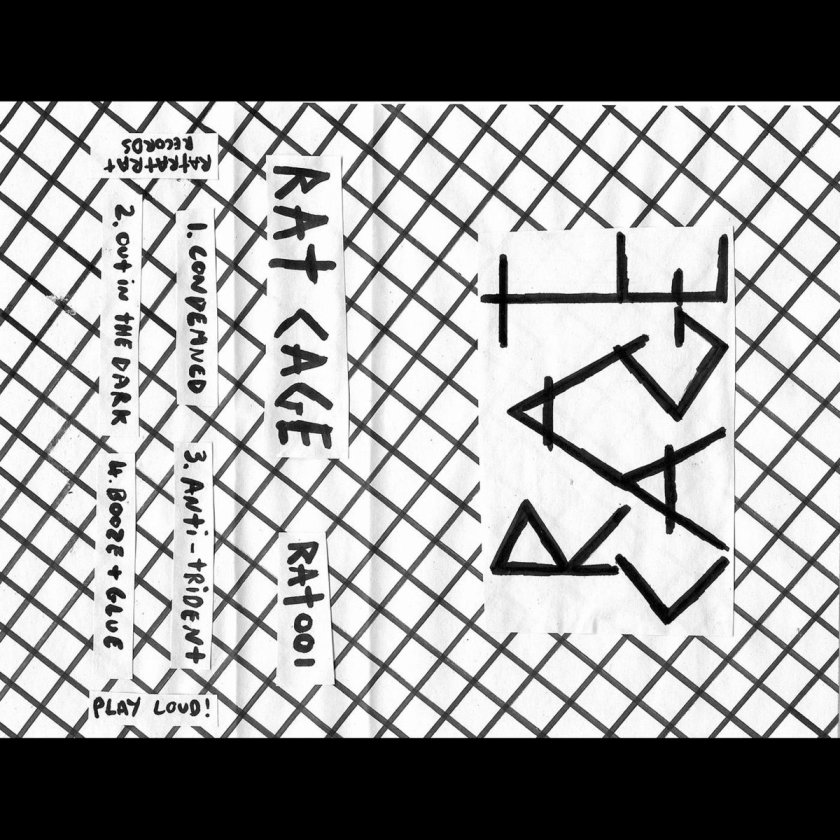 Spirited outing of mid-00’s punky hardcore from Sheffield’s Rat Cage – you know the type, semi dbeat driven songs, crisp distortion and whiffs of salivating garage punk for bonus catchiness. Super easy to get along with if you’re a fan of Government Warning or Career Suicide (minus their hyper fast tendencies), as this debut demo nails the ‘three broad, bright riffs is all you need to make a song’ approach. The raw vocals are delivered atonally and angrily, turning to the bizarrely overlooked issue of nuclear armament in ‘Anti-Trident’, and the hectic drumming is fast and sweaty throughout – all in all, another top notch Lughole escapee. 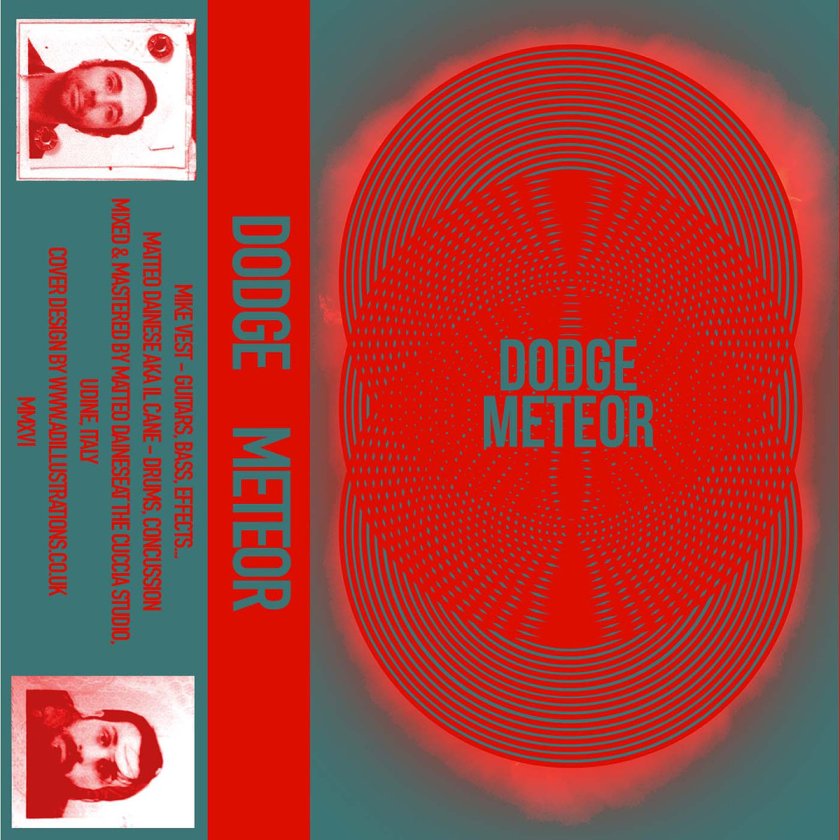 Mike Vest and Mike Vest fans definitely have a mutually beneficial addiction thing going on: there’s no way to stop him firing up his hotrod space-shred rig and dealing out new sounds (just look at the sheer volume of it all), and whatever product hits the streets gets lapped up fast. This latest one on Riot Season cassette imprint Swap Meat is another prime example of the versatility within his signature style – wah blizzards and psychedelic, doomed riffing – here found stalking around the superb hypnotic drumming of Matteo Dainese II Cane. Mean, muscly fuzz riffs groove hard under the flightpath of the nonstop blazing solos, so unrelenting they blur in to a mesmerising texture, like the doppelgänger antithesis to mopey shoegaze. All six tracks clock in around the relatively concise five minute mark, and the sudden shuddering to a halt comes as a surprise if you haven’t shaken the longform swells of Blown Out and Bong from your preconceptions. Maybe in years to come Vest will be thought of as the UK’s answer to Wino, a lead guitarist with a wicked one-off style, and if so, this Dodge Meteor tape will rank as one of many discography highlights. 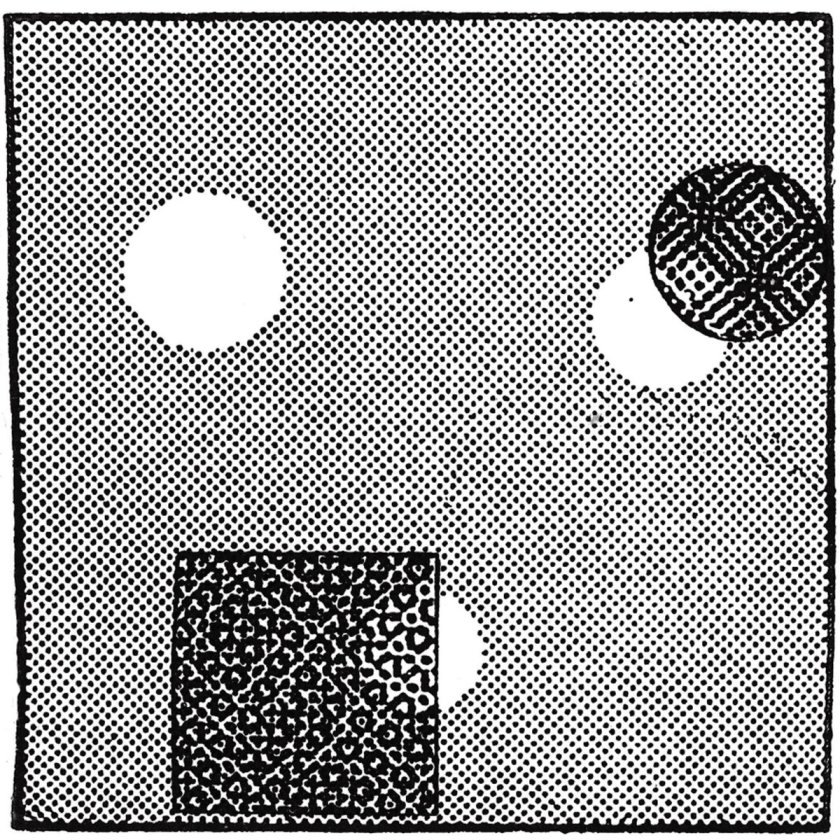 Anxiety’s first record is a welcome shot of druggy weirdness, crammed with twitching arty dance opportunities, thick coats of huffable reverb, and maniac punk freakouts. The bass shoulders most of the rhythm grunt work, which gives the shrill guitar permission to dislodge piles of feedback scree and tinker with creepy effects instead, going gleefully and sadistically overboard at every opportunity. The best tracks are when they surge faster in to a mashup of proto and post hardcore, best exemplified by ‘Sewer In My Head’, which sounds like a surf band trying to write a D-Clone song (or the other way round), or ‘Human Hell’, a loathing back-and-forth speedy number that finishes with space-age whooshes. ‘The Worst’ is perversely bouncy and good fun in spite of its sabotaging subject matter, although the same can’t be said about the final migraine, ‘VMD’. The whole MLP is outsider and then some, with self-deprecating and contradictory lyrics spat and howled out a mile a minute, and it’s no surprise to see La Vida Es Un Mus getting behind it when they sound in parts like Hank Wood’s nuts penpal from Glasgow, or the French Frustration without a sense of composure. 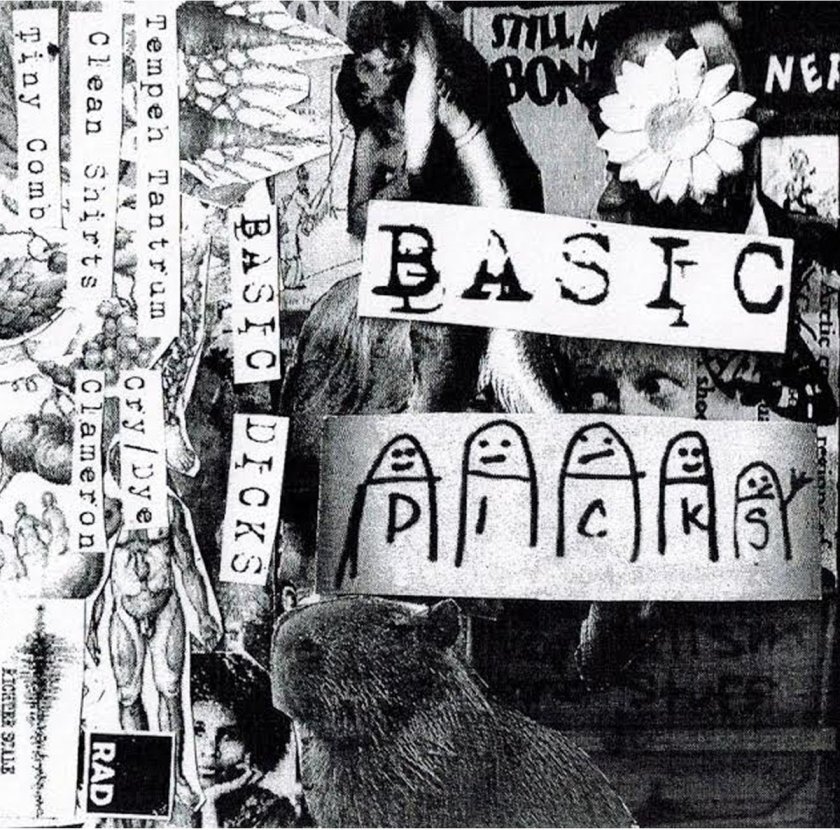 Blown out lofi puke punk from Oxford with a righteous boom-cha approach and played way too loud on purpose. It’s verse, chorus, verse with no mucking about by characters from Undersmile (outcast funeral sludge) and Girl Power (sick duo fuzz d-beat, anticipating the new release Welcome To the Gun Show being available soon), with a feral catchiness, alluring monotony and duel screamed vocals oppressing you often in an anarcho fashion. The kick gets so submerged that all that can be heard is smacked snare and a swarm of abused cymbals at points, but the clog of noise and mutant guitar style is easy to get along with – ‘Clean Shirts’ feels blurry, bruised and like everyone is playing out of sync, and final track ‘Clameron’ tricks you in to thinking it’s about to drop in to Jerry’s Kids ‘Is This My World?’. The whole demo is over in less than ten minutes, by which time Basic Dicks will be wedged firmly down your ear for good.